Before we performed this analysis, we believed testimonials were simply short videos describing how one company or product solved a client’s problem or what they liked about it. It’s not just this! Videos include a lot more! Read further to know.. Feel free to use these statistics in any commercial or non-commercial capacity. If you use them, we require a link to Content Beta.

62% of testimonial videos don’t use any visual effect.

TL;DR B-rolls are in fashion

TL;DR More opportunities being missed out

76% of testimonial videos don’t even include a call to action. Imagine the number of leads being missed out on.

What did we learn

What is A-Roll in Video Production?

In video production, the term A-Roll generally refers to the narrative footage such as the dialogue of the speaker or any interview segment.

Typically, testimonial videos that include only A-Roll footage are perceived as boring, monotonous and less engaging but you can include visual effects such as Kinetic Typography or Web & Apps motion graphics to enhance the video effect.

Approximately 74% of testimonial videos included both A-Roll and B-Roll, 20% featured only A-Roll, and 6% solely featured B-Roll. What is B-Roll in Video Production?

The additional shots taken during the production of a video are referred to as B-Roll footage. In other words they are visuals that supplements and supports the A-Roll.

We observed a variety of B-Roll footage in the testimonials such as:

1. Undirected footage of subject or people

Such shots are used to complement the main footage. This type of B-Roll makes the testimonial more engaging and catches the eye of the viewer till the end. Google has beautifully illustrated the working culture in the testimonial video using the B-Roll type.

62% testimonial videos included Undirected footage of subjects or people moving around the site. 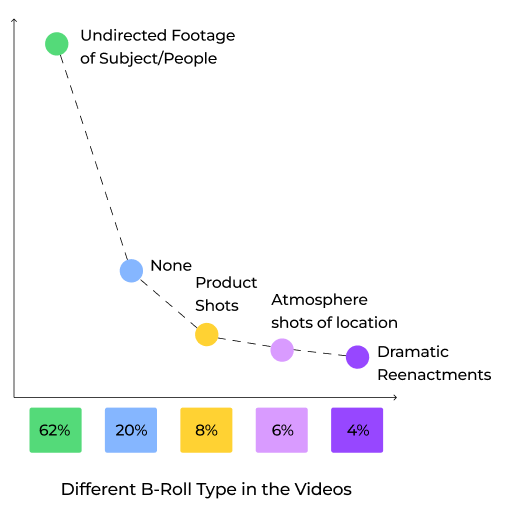 Such shots include a humor element with video actors performing their part or role in a drama. This B-Roll type makes the video testimonial interesting and viewers love to watch such videos till the end. Companies like Asana have used dramatic reenactments to beautifully express Where there’s Asana, there’s a way. And the best part is, you also don’t need to spend a pie on any visual effect.

Product photography is a type of commercial photography that revolves around taking pictures of products for commercial use. These shots include a variety of camera angles with much focus on close-up shots to highlight features of a product. This B-roll type is most commonly used by small businesses and corporate clients who look for professional quality videos.

This type of B-Roll can be used at different points throughout the video to make it more compelling and appealing. It can appear at the start, the middle, and at the end of the video. These are basically supportive shots and mostly used by companies to showcase their work space along with the testimonial.

It was also interesting to see that the video shots were taken using different camera angles in order to capture a good B roll footage. Some Camera angles that we observed were: These shots are taken at a close range to focus more on the subject and usually used to capture the face of the speaker in the video.

Our analysis shows that Around 30% testimonials were created using Close-up shots. Top notch companies such as Microsoft, Bank of America, Glassdoor, KPMG US, PwC, Pinterest, Greggs UK, etcetera have used close up shots in their video testimonials.

In this type of shot, your subject is shown from the waist up and appears like a portrait. It’s perfect for scenes where your subject is talking or in action because it allows the viewer to focus on them without losing sight of the scene’s other elements.

It was observed that 56% video testimonials were created using medium angle shots including Box, Dropbox, Amazon, Google, Google Ads and many more.

The shots are also referred to as environmental or establishing shots as it shows the subject along with the surrounding environment. In Wide-Angle shots, scenes become more realistic when the viewer is immersed in them.

Named after the renowned documentarian Ken Burns, this technique involves zooming, panning, and tilting the camera in order to make a still image come to life. This technique can be used to add a dramatic effect to B Roll footage of otherwise dull-looking archival material.

According to our survey, 2% video testimonials were created using the Ken Burns effect.

We also did a close analysis of potential angles in the case study and found three variations on the same such as:

It clearly demonstrates and explains a use case that the audience is unaware of. Most brands used this style to create testimonial videos. Some testimonials were focused on showcasing problem-solution. A situation where things didn’t go as planned and how the product acted as a problem solver.

A few testimonials were also found to be in the skeptic category but only 6% videos were found in this category.

Testimonials can revolve around either of these three styles but Disambigator gives a clear picture of the product along with client review. Now, most of us in the video production industry wonder – What is the appropriate length of your video testimonial?

Well, our analysis has made it simple for you!

It is estimated that the ideal testimonial video length is two minutes and thirty seconds based on our analysis.

Those who watch your videos don’t have a long attention span, and that’s a fact. You should keep the video under three minutes. That’s because 80% of marketers create videos under three minutes. Additionally, you can include graphics and text in your video testimonial to keep viewers engaged. A testimonial should be no longer than two or three paragraphs and rather than sounding overly formal or technical, these should be written in the voice of your customer.

The benefits of testimonials are that they are accessible, easy to understand, and connect with potential customers. One must note that Authenticity is the key to a successful video testimonial. However, only 4% video testimonials had a product link as CTA. Adding a Product link increases the chances of conversion and one must include it.

Take a look for yourself

Ready to make something amazing?